You Are Here: Research project: Information storage of the future - Oxide ReRAM cells 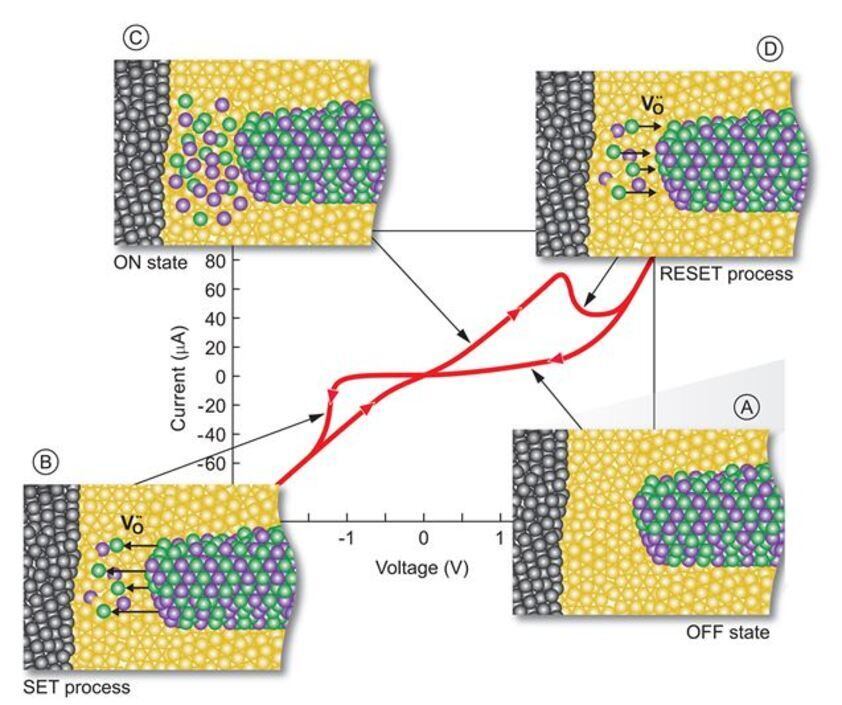 In RAMs (Random Access Memories), the cells are arranged in a matrix for storing information. This structure enables very fast access to the individual cells - regardless of the location in the matrix where the information is or is to be stored. The main memories used in computers today are Dynamic RAMs (DRAMs) whose information is based on the charge states of small capacitors. Due to self-discharging processes, the capacitors must be refreshed in a split second. Despite their excellent performance, DRAMs have the disadvantage of volatility: When the power supply is switched off, the stored information is lost. This significantly limits the speed at which computers or smartphones "boot up", on the one hand, and the general use in portable devices, on the other.

Non-volatile storage is available today with flash memories in high storage densities up to 128 Gbit. However, due to the slow write times (several 100 microseconds), the limited number of write cycles (105) and the high operating voltages (12-18 V), this class is not suitable for use as working memory.

There are a number of fundamentally new approaches to combining the advantages of DRAM and Flash. The most promising alternative concept for future information storage is the redox-based resistive RAM (ReRAM). An essential component of such a storage cell is an element which typically consists of a very thin metal oxide layer between electrode materials and which can be switched between two or more different stable resistance states by the direction of the applied voltage via a certain threshold voltage. Their properties combine non-volatility with high write and access speeds, a non-destructive read-out, very high integration densities and low energy consumption. At the Department of Materials in Electrical Engineering II, the physicochemical understanding of the resistive switching effect on the atomic scale is investigated in detail. ReRAM oxide cells are highly complex systems that raise numerous questions about the non-linearity of switching kinetics, the interrelation between ionic and electronic charge transport on the nanometer scale, the geometry of the switching areas, the effect of extremely high electric fields, the valence change of the metal cations during switching, and many more. In addition, the range of applications of ReRAM will be studied and in particular the fascinating possibility of using ReRAM cells as artificial synapses in novel neuromorphic computers to simulate the functioning of the human brain will be investigated.